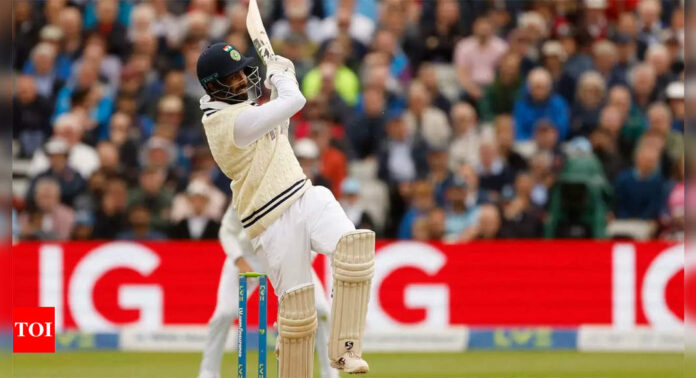 NEW DELHI: Jasprit Bumrah, the batter, was in carnage mode on Saturday as he smashed Stuart Broad for a 35-run over on Day 2 of the rescheduled fifth Test against England in Birmingham.
Broad has now the unwarranted record of conceding most runs in an over in Test cricket’s history.
Bumrah and his blade went after Broad as the Englishman relived the horror of the 2007 inaugural T20 World Cup when the now retired India all-rounder Yuvraj Singh smashed him for 36 runs that had 6 sixes in it.

Stuart Broad to @Jaspritbumrah93 the batter💥💥An over to remember! A record shattering over! #ENGvIND https://t.co/l9l7lslhUh

Bumrah went all out against Broad in the 84th over of the India’s innings as the England pacer was belted to all corners of the park
29 runs came off Bumrah’s bat in the over while Broad bowled 5 wides and a no ball in it as well.
Bumrah beat the legendary Brian Lara’s (28 runs in an over) feat by one run, a record that stayed with him for 18 years.
Lara had hit South African left-arm spinner Robin Peterson for 28 runs in a Test match in 2003-04, which included four fours and two sixes off six legal deliveries.
Former Australia player George Bailey had also scored 28 in an over but he was behind Lara in terms of boundary count.
The Over
The over started off with a four that came off the top edge of Bumrah’s bat and went to the fine-leg fence.
Broad then bowled a bouncer that was too short and went over keeper Sam Billings’ head.
The third ball was a no ball from the England pacer as the top edge off Bumrah’s bat took it over the keeper and all the way.
Bumrah then smashed 3 fours on a row over mid-on, to fine-leg (inside edge) and in front of square on the leg side.
The fifth legal ball of the over was a clean hit from the India captain that went all the way over long leg. Bumrah then finished off the over with a quick single to retain the stike for the next over.
The over eventually read – 4 Wd5 N6 4 4 4 6 1
India eventually got all out for 416 in the 85th over as Bumrah finished on an unbeaten 31 that came off just 16 ball and at a strike rate of 193.75.