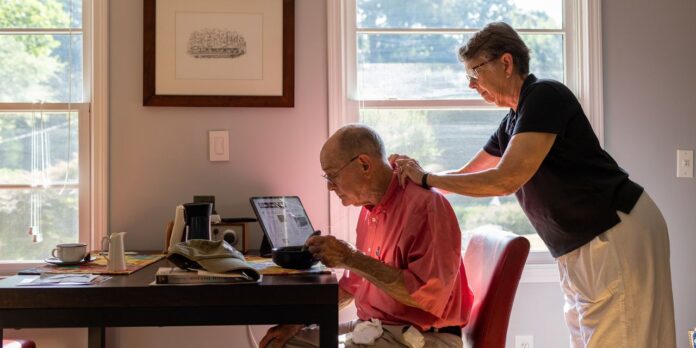 new drug for amyotrophic lateral sclerosis last week. Now some U.S. patients with the fatal neurodegenerative disorder—also known as Lou Gehrig’s disease—are considering a trip north to get the medication, Albrioza. The drug isn’t approved in the U.S.

William Woods, a 75-year-old retired doctor in Atlanta who was diagnosed with ALS in 2019, is contacting Canadian doctors who might help him get Albrioza. “There is a lot to figure out,” he said, “but I am confident I will find somebody I can go see.”

Allistair Abraham of Washington, D.C., is also weighing a trip to Canada. Diagnosed with ALS just over a year ago, the 41-year-old doctor said that until recently, he had been taking two ingredients that make up Albrioza. But he said one of the ingredients, the prescription drug sodium phenylbutyrate, has been unavailable in recent weeks, prompting him to consider seeking Albrioza.

The ALS Society of Canada said that it was receiving inquiries about Albrioza from U.S. patients but that it was too soon to know how many Americans might travel to Canada to get the drug. Some Canadian doctors are getting calls and emails from U.S. patients about setting appointments with physicians who might prescribe the drug.

“I tell them I am happy to see them, but they need to see me in person,” said Dr. Angela Genge, a McGill University neurologist who treats ALS patients.

Health Canada, which approved Albrioza with the understanding that Amylyx provides additional data to confirm the drug’s benefit, hasn’t said whether health authorities in Canada would welcome U.S. patients seeking the drug there. “Access for Canadians, to the prescription drugs they need, is the top priority,” an agency spokeswoman said.

Amylyx said that Albrioza should be available commercially in Canada within the next six weeks, and that it hasn’t yet announced the drug’s price. The company has joined with

Patheon division in Ontario to manufacture the drug, a powder that will be dispensed in single-use sachets that are dissolved in water and taken by mouth or a feeding tube.

Asked about U.S. patients seeking the drug in Canada, a company spokeswoman said, “We encourage patients to speak to their physicians to determine what is right for them…We are confident in our ability to supply product to people who are eligible for Albrioza at this time.”

Canada has a universal healthcare system, but not all provinces cover the same drugs and treatments. Foreigners must pay out of pocket to see a doctor or buy medicine in Canada, according to health experts there.

Travel can be hard for people with ALS, which affects more than 16,000 people in the U.S. The illness progressively impairs the ability to move and speak. Dr. Abraham is fed through a tube, requires a breathing machine at night and uses a wheelchair. But as the father of two young boys, he said that “getting more months with my family is worth a trip to Toronto,” where his sister lives.

The U.S. Food and Drug Administration has approved a handful of drugs for ALS, but none cure the disease. Albrioza isn’t a cure either. But in a May 2022 letter to the FDA, more than three dozen ALS clinicians urged the agency to approve Albrioza, saying that the drug provides clinically meaningful benefit.

For a study published in 2020 in the New England Journal of Medicine, 137 ALS patients took either Albrioza or a placebo—along with any other drugs they were taking for the condition. Those who took Albrioza declined more slowly than those who got the placebo.

The FDA is still weighing whether to approve Albrioza. An advisory panel for the agency voted against permitting the drug in March after finding that Amylyx’s clinical-trial data lacked sufficient evidence of the drug’s effectiveness. A larger clinical trial of the drug is under way, but the initial results likely won’t be available until 2024, according to the company.

The FDA, which isn’t required to follow the panel’s recommendations, said it would make a decision by Sept. 29, according to Amylyx.

FDA regulations prohibit the importation of drugs that are approved in another country but not in the U.S., according to the agency’s website. But the website indicates that there are exceptions, including when the drug is for a serious ailment for which effective treatments are unavailable, is for personal use only and doesn’t represent an unreasonable risk.

John Campbell, a 58-year-old lawyer in Atlanta who was diagnosed with ALS nine months ago, said he had been waiting to see if the FDA approved Albrioza before planning a trip to Canada to get the drug. But that has changed as his condition has declined. “I need to be proactive,” he said, adding that he can still play a round of golf if he drives a cart but that he now gets winded walking up stairs and needs a portable ventilator to breathe at night.

He said his reading of the FDA regulations is that ALS patients would be allowed to bring the drug back to the U.S. “I will do whatever I can do to get the medication and not end up in jail,” he said, adding that he had contacted the FDA to confirm but hadn’t yet heard back.

How will Canadian approval of the new ALS drug affect families you know? Join the conversation below.

An FDA spokeswoman said the agency recognizes the need for “new, safe and effective treatments for ALS” and is “committed to working with companies and the patient community to facilitate development and approval of products.” Asked whether U.S. patients would be allowed to import Albrioza, she provided a link to the agency’s website but offered no details. There are risks to consumers who buy drugs not approved in the U.S., she added, and the FDA urges patients to purchase medications from a licensed pharmacy.

“We implore the FDA to resolve this situation by approving the drug as swiftly as possible,” said a spokesman for the ALS Association, a U.S. nonprofit that supported Albrioza’s development with grants totaling $2.2 million. The association has advocated for FDA approval of Albrioza, the spokesman said, adding that if the FDA doesn’t approve the drug, “Medical tourism will be a much more critical issue.”

Sandy Morris, a former business analyst in Sierraville, Calif., was diagnosed with ALS in 2018 at the age of 51. She said she made four trips to South Korea in 2019 to receive a stem-cell therapy for ALS that isn’t approved in the U.S., paying more than $140,000. But when it comes to Albrioza, she said she intends to wait for the FDA decision.

“Now that Canada has approved it, I hope we will be right behind them,” she said.

Dr. Woods, the retired physician in Atlanta, in recent months has noticed signs of the disease’s relentless progression. His legs are weaker, he said, requiring him to use his cane not only when he is out in the garden but also when he walks on smooth surfaces. He can no longer easily walk extended distances or pull himself out of the pool after a swim.

“The changes have re-emphasized that I need to get to Canada sooner rather than later,” he said.

Pandas evolved their most perplexing feature at least 6 million years...